Thanks, Eric Dubay. You have correctly pointed at a fatal, conclusive piece of evidence about the flat earth. Unfortunately, it is fatal to the flat earth theory, not the globe!

In short, Dubay is right. On a flat earth, the distances should get bigger as we travel south in the southern hemisphere. Dubay thinks they really do. Why? Because he claims, with no evidence cited, that some early sailors got lost in the  southern seas.

The fact is that no map ever produced by flat earthers works for the south hemisphere.

Well, if we think very hard, we might be able to think of other reasons why someone might have gone astray in some unspecified time in the past.

One the other hand, people sail, fly and travel by land on long journeys, today. Yet none report that a flight, or a roadtrip across Australia, or a sea voyage mysterious took many time the expected period. That does not happen..

Now we have some claims that the measured distances along latitudes in the southern hemisphere don’t match what a globe will tell you they are.

If you used a flat earth model for celestial navigation (with a sextant for instance), you would be completely lost because it just doesn't work (we'll have more on that later). All of the impressive feats in sailing history that relied on celestial navigation, like Shackleton's lifeboat journey to South Georgia, just wouldn't have worked if they had navigated on a flat earth model.
https://en.wikipedia.org/wiki/Voyage_of_the_James_Caird#The_open-boat_journey

I can see why Mr Dubay needs to say that. Looking at the flat Earth map he shows at various points, it’s obvious that East-west distance in Southern Africa and South America, Australia etc  would be much wider in a flat Earth than everyday experience of travellers and residents show that they actually are.

How does Mr Dubay solve that problem? He boldly claims that they really are wider!
Of course, he doesn’t offer evidence. The only captains he mentions were the first pioneer, groping their way into a southern hemisphere that was unknown in large part. Sometimes they got lost and wandered around, and for Mr Dubay, that is evidence enough.

He keeps quiet  about the multitude of modern navigators who travel those waters all the time, using charts that correctly assume a spherical world, without a moment’s difficulty. And how many  charts based on a flat earth are published, let alone used by real-world navigators. None.

Dubay uses a few alleged examples that are mainly over sea areas, so that fewer people other than seafarers and pilots  will have experienced  that it’s nonsense from their everyday experience. And, as usual, he doesn’t give any references so we can check his alleged facts for ourselves. Who measured those distances, Mr Dubay, and how? Or could it be that someone is trying to fool you about that?

When Mr Dubay provides the necessary references, I’ll come back to this.

Just a small side on point 35; Mr Dubay says many captains exploring  way down south round the Antarctic got lost and confused in the early days. In unknown waters, with many obstacles of floating ice floes, a very jagged coastline and some of the foggiest weather on earth, because of all that warmed air meeting cold air, do we need any other explanation for their difficulties? But with modern navigations aid and maps, we don’t find ships getting lost nearly so much.

Dubay doesn’t ever give any details of his flat earth model of the world, carefully avoiding the many numerical impossibilities  that it would show if he gave any numbers.  But look at his map here  - I know it’s unclear, but it’s the best he gives us. 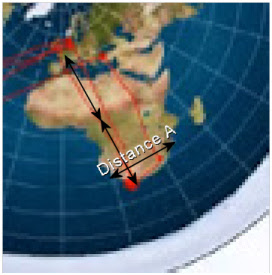 Look at distance A across the southern African continent.

It goes roughly from Luderitz or Elizabeth Bay in Namibia in the west to around Maputo in the east, a distance of  about 1080 miles

Notice that this passes through the region of Johannesburg and Pretoria at the heart of South Africa. If distances were radically wrong, local residents would know it, and they’d be up in arms, complaining to map-makers and Satellite navigation device vendors, and to their car manufacturers about the inaccurate milometer  in their vehicle. This is not happening.

Now as I said, Dubay never gives dimensions or distances if he can avoid it. However, in his flat-earth Africa, the distance we have measured is less than half the distance from Capetown in the south to Tunis in the north of the continent.

See how I’ve duplicated the length of the 1080 mile long arrow twice, and the northern end is somewhere in Switzerland? It looks as if Dubay’s flat Africa is only about 1.8 times as long North-South as the Namibia to Maputo measurement, that is about 1850 miles

Yet Google Maps, and every published map and globe, shows that this distance is 4,900 miles, nearly 5 times the east west distance we measured. 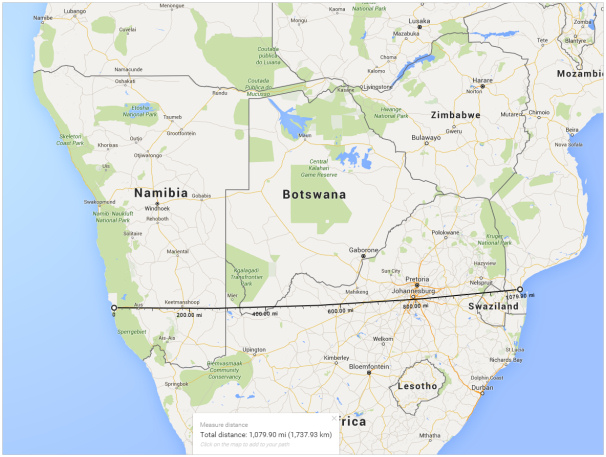 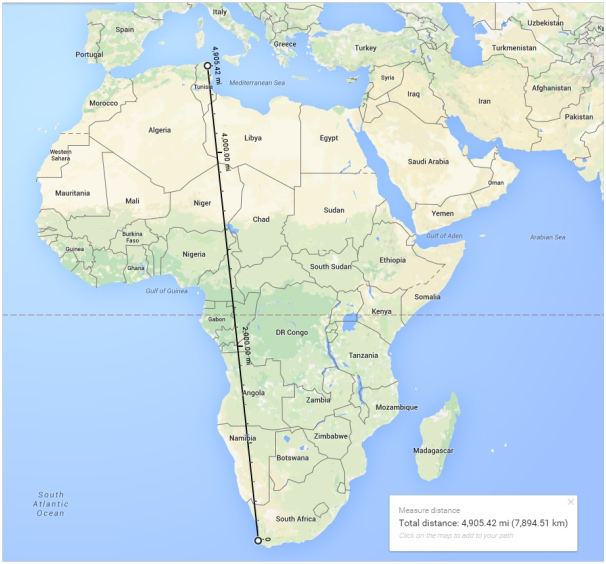 That is more than 3 times the distance Dubay’s squashed flat-earth map shows. So Dubay’s Africa is around 3 times too wide in proportion to it’s north-south length, compared  the real one distances that are tested  in practice by pilots, drivers and sailors every day.

Dubay’s flat-Africa is less than twice as long as it is wide, while the real one is 5.5 times as long as its width. And he wants us to believe that nobody notices this?

Google Earth shows the West-East distance from Perth to Brisbane to be 2,225 miles. North to South from Darwin to Adelaide is 2,600 miles. 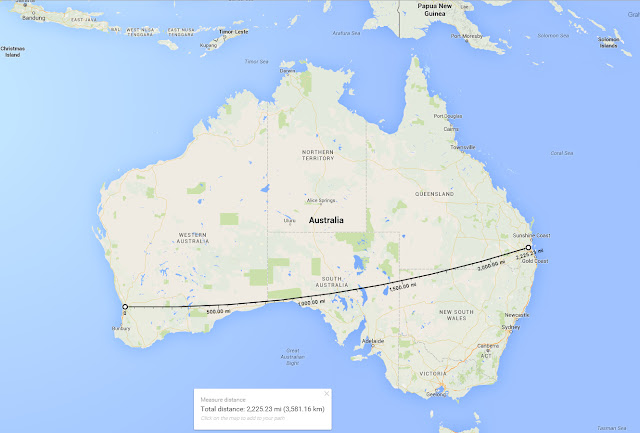 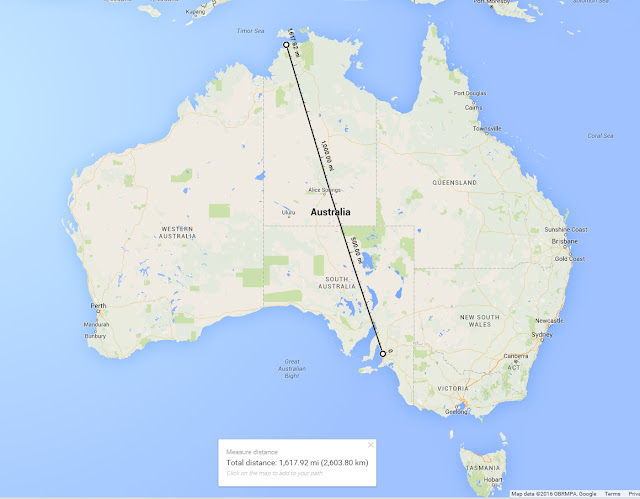 Again, no numbers on Dubay’s map, but here is Australia as shown:  it doesn’t look remotely the same. Nobody in Australia could mistake on for the other. Dubay's flat-Australia is so distorted that it is hard to pick out precise locations. 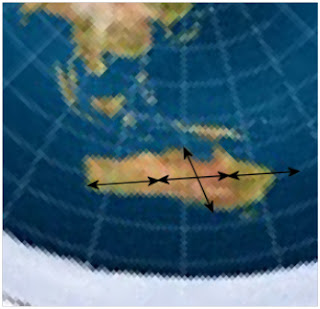 Even directions and angles are wrong but even so, his Australia is almost 3 times as wide as it is long North-South. No reasonably well-travelled Australian could be that wrong about their experiences.

Here is some more on this topic: