19  "Tycho Brahe  famously argued against the heliocentric theory in his time, positing that if the Earth revolved around the Sun, the change in relative position of the stars after 6 months orbital motion could not fail to be seen. He argued that the stars should seem to separate as we approach and come together as we recede. In actual fact, however, after 190,000,000 miles of supposed orbit around the Sun, not a single inch of parallax can be detected in the stars, proving we have not moved at all.”

Another genuinely interesting one, even though it’s long since been explained. In fact, it’s a great example showing that new scientific theories often can’t answer every objection at first, even though they are right. It’s worth spending a little time on.

Mr Dubay is relying on what was once quite a good objection to the heliocentric arguments of Copernicus and Galileo from the 16th century.  However, he carefully doesn’t mention that it was one that was answered at that time, and has been proved conclusively to be false, when the parallax was first measured by  Friedrich Bessel in 1838 .

To find out how, I’ll try to make Mr Dubay’s explanation a bit clearer, and yet again give you a simple way to test his claim for yourself.

OK, so Galileo and Copernicus said that the earth circles the sun. Tycho Brahe objected; “In that case, why don’t we see the stars seeming to move from side to side as the earth moves form one side of the sun to the other, because of parallax. Good question.  The short answer is: because the stars are much too far away!

What is parallax? I’m look out of my window at some nearby houses. If I move my head from side to side, the houses seem to move a bit. That’s because I’m viewing them from a slightly different angle. So why don’t stars seem to do the same?

Well, further off, I can see another street of house. These seem to move much less, because they are further away. So the angle doesn’t change so much. If we drew this, the further house would make a much narrower triangle with my head’s  left and right position. The base of the triangle would be a couple of feet, the length of the longest side maybe 70 feet, enough for me to see a little “wobble”. That is parallax.

Further away still is a taller building that hardly seems to move at all. Any change in angle is too tiny for me to see. And that’s the clue to the answer. 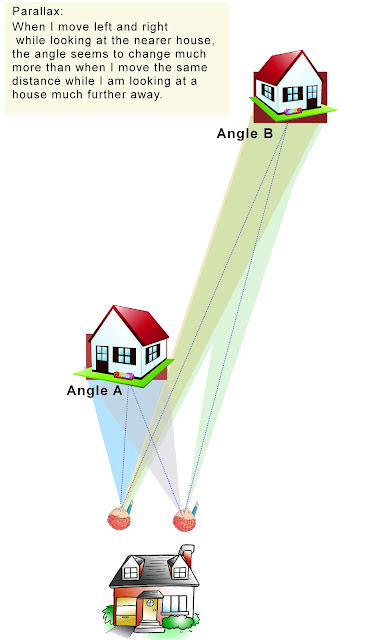 Tycho Brahe had actually found an early piece of evidence that the stars are much further way han was though at his time. In fact, even the closest star is about 4.3 light years away. That’s 2.53 * 1013 miles away – or about 40 million million kilometres. That’s something like 270,000 times as far as the distance from the Earth to the sun.

If you drew THIS triangle – well you couldn’t, not on any sensible sized sheet of paper. It’s be just a line.

Why? Suppose you could draw the “long side” (the distance to the nearest star, Proxima Centauri ) as a line a mile long. How wide would the base of the triangle be? That is, the distance that the earth travels from one side of the Sun to the other?

Answer: just under 1/2 an inch - compared to a mile. Obviously you couldn’t expect to see any parallax wobble with such proportions, could you?

Mr Dubay’s argument seems even weaker than I thought. Give him a mile, and he’ll take half an inch!
Posted by Inti at 17:34