5) “One portion of the Nile River flows for a thousand miles with a fall of only one foot. Parts of the West African Congo, according to the supposed inclination and movement of the ball-Earth, would be sometimes running uphill and sometimes down. This would also be the case for the Parana, Paraguay and other long rivers.”

This looks like Mr Dubay is repeating ‘Proof’ 4 with a different river, and with the same confusion. He often makes the same point again and again, presumably to pad out his number of proofs to “200”.

Anyway his claim is plain false. Pants-on-fire-false actually. Again, there is no long stretch on earth where any river flows upwards under normal conditions. Here's a diagram showing the Nile's elevation: 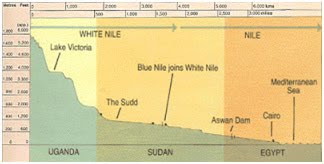 The claim of a one-foot drop over 1000 miles is just false.

Maybe Dubay is confused about what 'up' means? Apparently, he thinks that if you don't glue them down, things in Australia would fall off if they aren't glued down. Because, you know, gravity is a myth or something?