2) “The horizon always rises to the eye level of the observer as altitude is gained, so you never have to look down to see it. If Earth were in fact a globe, no matter how large, as you ascended the horizon would stay fixed and the observer / camera would have to tilt looking down further and further to see it.”

This is nonsense. It just isn’t true.

Do your own research: here is  a simple way to test this for yourself. 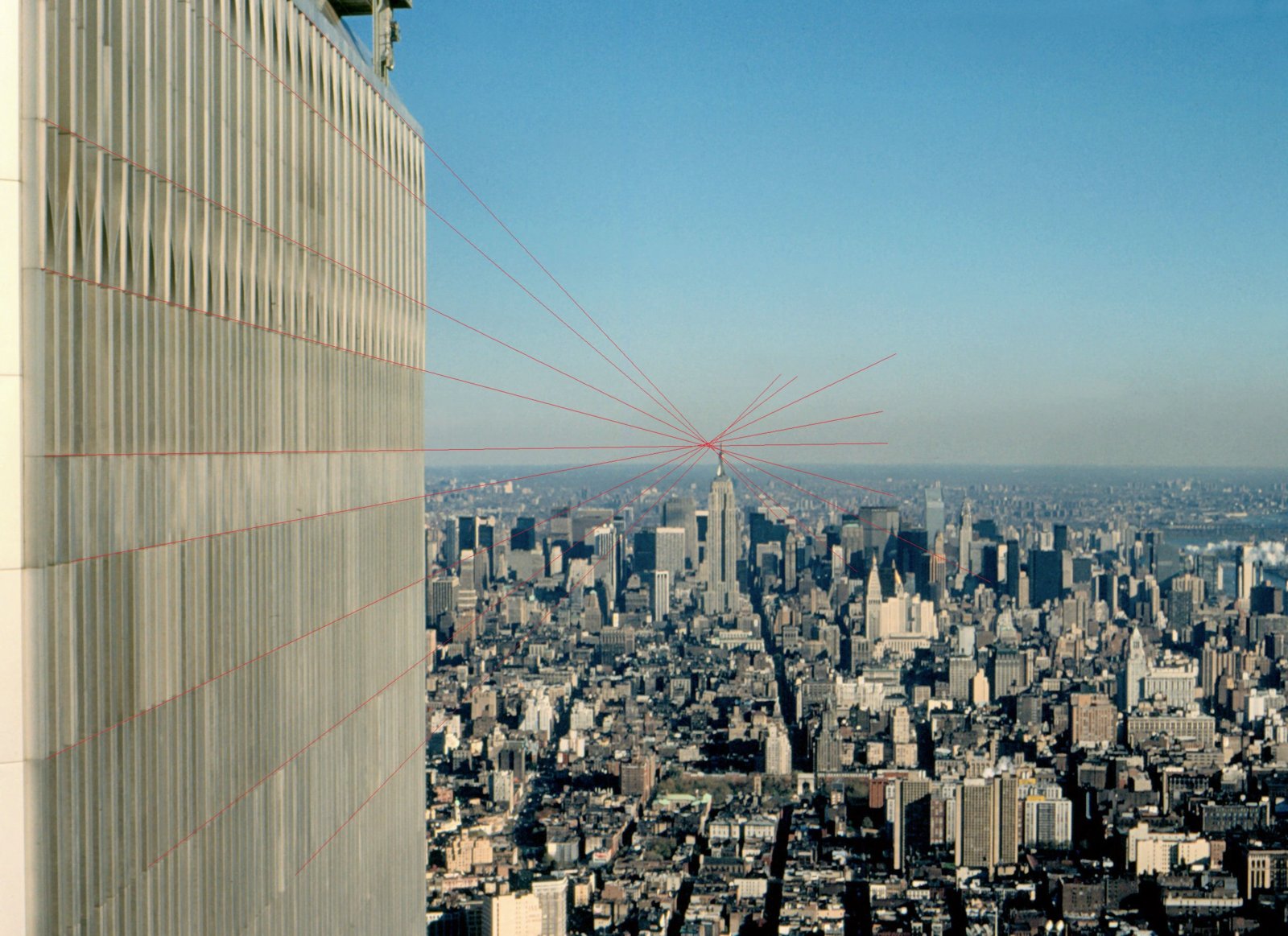 Draw the red lines to extend the horizontal base of any high windows, bricks, slabs etc. towards the horizon.

You will find that the lines converge above the horizon, not on it.
I don't think that anyone would accept this claim if it wasn't hard to see the drop of the horizon with the naked eye. Taking a photo and checking than lines disproves Dubay's claim instantly.

You can see the same thing here: 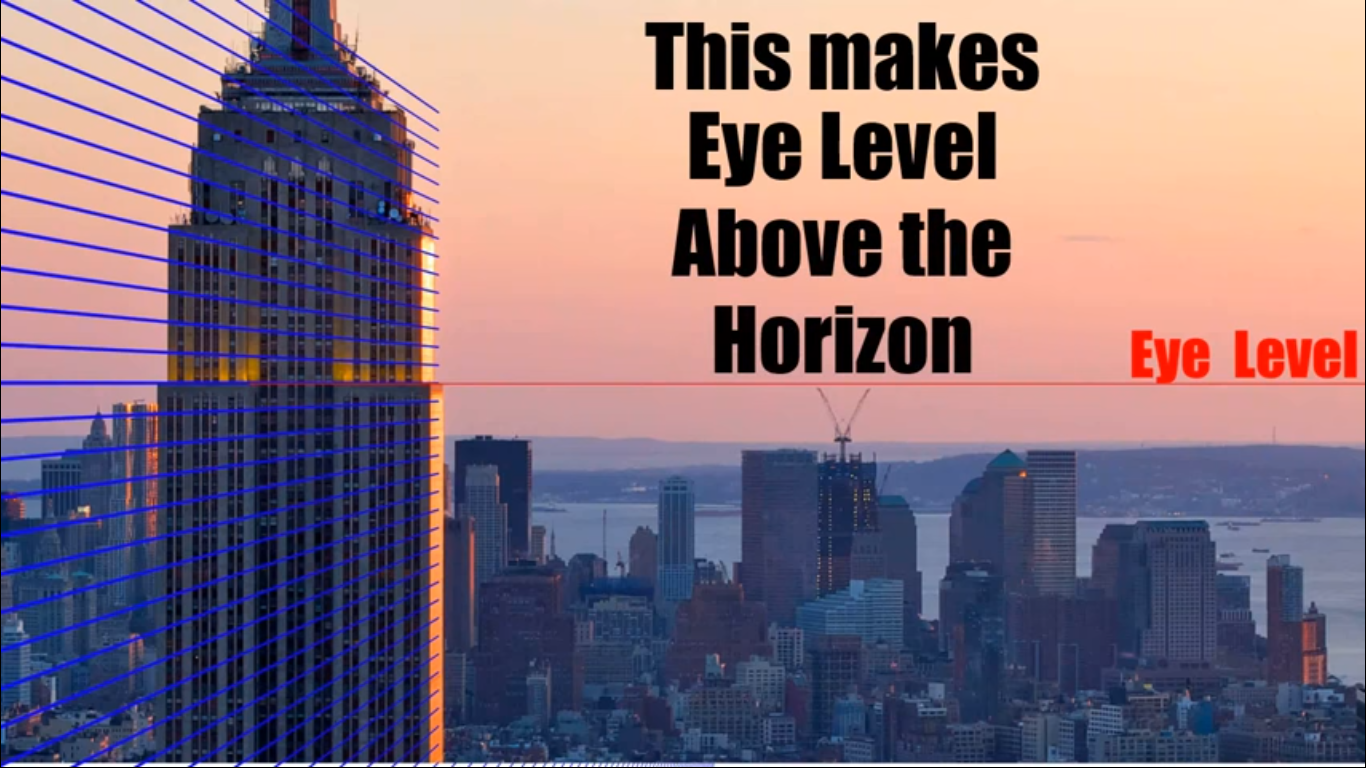 and in this video


For more discussion on this,claim see here : https://www.metabunk.org/how-to-show-the-horizon-is-below-eye-level-using-actual-eyes.t8845/#post-207592  (thanks to Rory for the links above)

More evidence against this claim:

It depends how high you go. Plenty of people have gone high enough to see it, but flat earthers evade that by claiming that  “they’re all in on the conspiracy, and their photos are fakes”.

“The horizon always rises? No, it doesn't. What do you think the horizon is, some mythical creature? Let's show what it is. Suppose for a moment that you're shining a laser while standing on a huge sphere. You start by pointing it upward, then move it downward towards your feet. The Horizon will be that point where the laser first hits the sphere. Yes, again, it is that simple. A slightly more complicated story allows us to calculate. I took it off Wikipedia/Horizon, and it includes the calculation.”


More on this claim:

In his video, flat earther supporter Antonio Subirats explains accurately why the horizon should drop measurably on a globe, but not noticeably on a flat earth. His logic is claer and correct, and he staes clearly that,


He suggests a test using a tube, and prtedicts that the horizon will not fall, like Dubay and most flat earth beleives. However, using the water level shown here is likely to be more accurate ,  the water level has been recommended by flater earthers and it makes it obvious when the device is really level, and to make the levelling obvious to the eye and indisputable. The two vertical tubes are linked so that the water level is the same in each tube, so when the water surface is aligned in the front and rear tube, the line between them must be level on either flat or globe earth.

Such levels have been used and advocated by flat earth supporters in other cases, so the reliability of the instrument and method should not be in dispute.

I've shown screenshots from the video at each level. The annotations are mine. You can check them against the video at any point where the water level device is held level, with the water in both tubes level.

On the beach just above sea level: 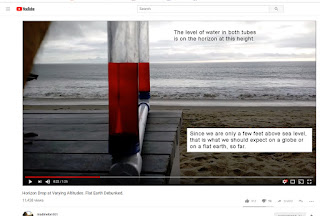 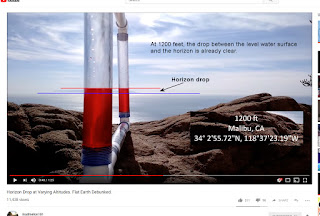 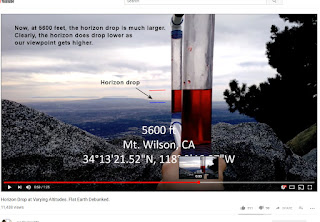 The conclusion is obvious. As we rise higher, the horizon really does fall. Flat earth advocate Antonio Subirat's experiment has be tested and the result (as in the tests above, and many others, was what he stated was  a demonstration of the spherical earth.

To repeat - see how this claim was conclusively refuted by trying a test a globe denier suggested, see these videos. Briefly, Antonio Subairats suggesed taking a tube on a tripod  and lining it up with the horizon.
Then look through the other end of thetubeat the opposite horizon.  Subirats said, rightly, that if the earth was flat, the opposite horizon would be lined up precisely in the tube, too; while on a globe, the opposite end of the tube would be pointing above the horizon. His logic is fine -, that is what we should expect in each case.
So debunker Critical Think did this, carefully, and recorded it.
Guess what! By this flat-earther's own test, the earth is a globe, and the horizon is not always at eye level.
Here are all the videos of Critical Think's test;
The Infamous "Red Tube Experiment
https://www.youtube.com/playlist?list=PL3X9O1ESGK_nAosfRc7syRnZ42fwH92p6