60) “Anyone can prove the sea-horizon perfectly straight and the entire Earth perfectly flat using nothing more than a level, tripods and a wooden plank. At any altitude above sea-level, simply fix a 6-12 foot long, smooth, leveled board edgewise upon tripods and observe the skyline from eye-level behind it. The distant horizon will always align perfectly parallel with the upper edge of the board. Furthermore, if you move in a half-circle from one end of the board to the other whilst observing the skyline over the upper edge, you will be able to trace a clear, flat 10-20 miles depending on your altitude. This would be impossible if the Earth were a globe 25,000 miles in circumference; the horizon would align over the center of the board but then gradually, noticeably decline towards the extremities. Just ten miles on each side would necessitate an easily visible curvature of 66.6 feet from each end to the center.”

Mr Dubay can’t get the understand some basic points about the 3D geometry of a sphere. His mistake here springs from the same misunderstanding as his nonsensical claim that aircraft pilots would have to repeated push their plane’s noses down to stay at the same height. He doesn’t understand what “down” means in relation to the world we are standing on! He keeps thinking that going round the curved surface of the globe is somehow going ‘down’. But down in relation to what?

Down really means inward, towards to centre of gravity of the earth. Movement around the curve is level movement, not going ‘down’.

This mistake is obvious when he writes that “the horizon would align over the center of the board but then gradually, noticeably decline towards the extremities.” He is imagining the situation completely wrongly.
Whichever direction the observer looks, the earth will curve ‘downwards’ at the same rate.. So why would the part of the horizon lined up with the left end of the plank look any lower than that lined up with the centre or the  right end?

The only obvious experiment that would allow you to model this would need a sphere big enough to reproduce the relative scales. Something like this one in Swanage, Dorset might be big enough. 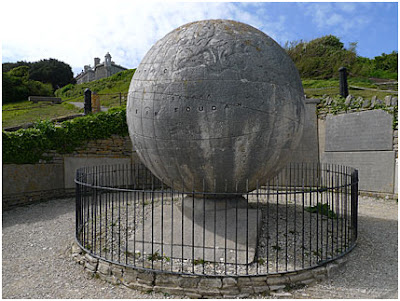 Or maybe this (on Ebay) , though it wouldn’t be very rigid: 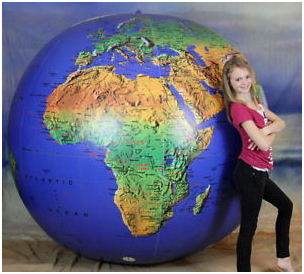 Then you could use a mirror or periscope to get an “ant’s eye view” along the curved surface, Right down against the globe, you would see that the horizon appears level all round . Only when you lifted the mirror away from the globe by some distance would you see the curvature of the surface.

I’ll include the start of Daimonie’s explanation, because it’s interesting.

They claim that if the Earth `were a globe' then there would be an easily visible curvature of  66.6 feet (if the horizon over the plank measures 20 miles). I'm not sure what they mean by curvature here; the curvature I'm thinking of has dimensions of one over length.

The outcome is quite clear, although keeping track of the water's refraction is quite important. It is this latter detail that the flat earthers often try to use for their advantage. While wikipedia has a rather neat article on it, it lacks a clear conclusion. The introduction is, by far, the most clear:
...later attempts to reproduce the observations firmly support that the Earth is a sphere.

It's actually a story used quite often by flat earthers, although they loathe naming it now because the rebuke is so readily available. Especially the Rational Wiki resource is becoming quite widespread.

But how far can this sort of thing go? Well, let's go back to the late 19th century:

Mrs. Wallace,—Madam, if your infernal thief of a husband is brought home some day on a hurdle, with every bone in his head smashed to pulp, you will know the reason. Do you tell him from me he is a lying infernal thief, and as sure as his name is Wallace he never dies in his bed.


You must be a miserable wretch to be obliged to live with a convicted felon. Do not think or let him think I have done with him.

This is the proud heritage of the Flat earther.

If you're interested in reading about this, I suggest you read the Scientific American (Blog) on it.”