42) “In the ball-Earth model Antarctica is an ice continent which covers the bottom of the ball from 78 degrees South latitude to 90 and is therefore not more than 12,000 miles in circumference. Many early explorers including Captian Cook and James Clark Ross, however, in attempting Antarctic circumnavigation took 3 to 4 years and clocked 50-60,000 miles around. The British ship Challenger also made an indirect but complete circumnavigation of Antarctica traversing 69,000 miles. This is entirely inconsistent with the ball model.”

Something about Antarctic circumnavigation being far too long?

Have a look at this discussion:

Most races or solo attempts start from Europe. Due to the configuration of the continents, sailing around the world consists in sailing around the Antarctica continent, passing south of Cape Horn, Cape of Good Hope and Cape Leeuwin. [Wikipedia/World sailing record] 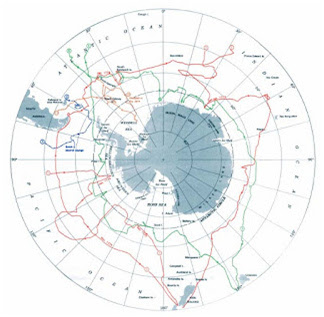 So what's the issue here? Well, neither Ross nor Cook exactly took a straight route. I mean, look at the image above.

And here's the flat-earthers pretending he went in a nice circle. The key here is that 'circumnavigated' means 'navigated around something'. It doesn't mean 'went in a circle'. The word 'circumference' is apparently used for two reasons; one is because the expression is 'to go around', even if it is a square object. The other is because perimeter-navigated doesn't sound as nice.

Because “circum” comes from circumference, which is the perimeter of a circle, people will naturally think of circles - even if there's absolutely no circle present. “
Incomprehension of the model.

If these numbers should be a disproof of a globe in any way, then you could expect these two cited gentlemen to have allegedly circumnavigated Antarctica, roughly describing a circle around it on a proposed globe.

You could then take these described distances and show how they were not consistent with a spherical earth. However, looking at the expedition of Sir Ross, you will find something like this: 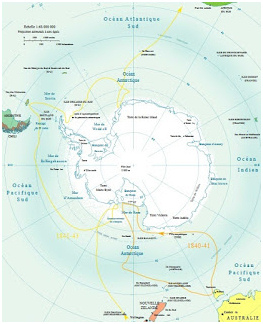 The described paths are nowhere near circular. So, in what way do they contradict a spherical earth?
If you were circumnavigating Antarctica in the same fashion, these are the exact same distances you would expect on a spherical earth. By the way, none of these explorers has ever claimed that earth was flat.”