1. “The horizon always appears perfectly flat 360 degrees around the observer regardless of altitude. All amateur balloon, rocket, plane and drone footage show a completely flat horizon over 20+ miles high. Only NASA and other government “space agencies” show curvature in their fake CGI photos/videos.”

Here is an useful explanation about how to check this for yourself. No need to rely on Nasa!

How to Take a Photo of the Curve of the Horizon

Here is an a example where the curve has been deliberately and openly exaggerated by 4 times in order to prove that it is there (alsthough hard to see from this height..

Passengers have seen a curved horizon from Concorde (Concorde flew higher than most airliners, which don’t much higher than 40,000 feet, not high enough). Of course, if you are a conspiracy theorist you can always dismiss anyone's account as "part of the conspiracy". Which is why such theories are irrational and unscientific - they protect themselves from any possibility of falsification.
Here is some more photo evidence – amateur images at http://spacephoto.tumblr.com/

However, Daimonie, I’m afraid I have to say that the other video you post is not convincing; there is too much clear barrel distortion caused by the wide angle lens – at around 2.50 and again towards the end we see very strong curvature almost at ground level, which must be an artefact. Moreover, at just 3.18 we get momentary concave horizon as the camera bobs up and down.

However, the thread for Metabunk I mentioned above shows how to avoid this distotion, so anyone can have a go for themselves.

More on the horizon's curve.

Here is a paper examining when it is possible to see curvature, based on both calculation and observation by the author and others: http://thulescientific.com/Lynch%20Curvature%202008.pdf

This shows why Mr Dubay’s photos don’t help him. The one at ground level shows a sharp horizon, but the high altitude horizon is too blurred to let us measure any curvature.

On page H41 the author writes: “2. Visually Detect the Earth’s Curvature I first examined the horizon from commercial jet aircraft. While there was a general sense of the horizon, actually identifying the horizon’s location was difficult. It was a very low-contrast boundary in a region of the sky where there were much higher-contrast changes. There were almost always clouds on the horizon that prevented accurate horizon location. When the horizon was clear, detecting curvature from around 35; 000 ft was relatively easy, providing that a wide, unobstructed FOV was available. With a horizontal FOV of 90° or more, the curvature was subtle but unmistakable. Under similar conditions with a FOV smaller than about 60°, the curvature was not discernible. Thus, visually detecting the curvature would seem to depend on both the actual curvature and the FOV.”


There is a discussion about what Lynch says here
https://www.metabunk.org/are-lynchs-horizon-calculations-correct.t7877/#post-189357

It contains a lot more than this graphic: 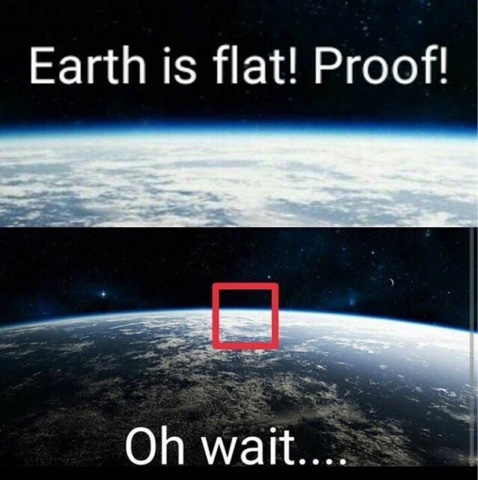 Warning - there is some mathematics in that thread!

Have alook at this video for more details, too.
Posted by Inti at 16:27