3) “The natural physics of water is to find and maintain its level. If Earth were a giant sphere tilted, wobbling and hurdling through infinite space then truly flat, consistently level surfaces would not exist here. But since Earth is in fact an extended flat plane, this fundamental physical property of fluids finding and remaining level is consistent with experience and common sense.”

Dubay claims that truly flat surfaces wouldn’t exist on a sphere. Not for the last time, Mr Dubay shows that he doesn’t understand why numbers and quantities matter when seeking the truth.
Do the mathematics. Work out how large the curvature would be on a sea or large lake , given an Earth with a diameter of 7,900 miles.

In the days of sail, sailors often noticed that they could see other ships further off if they climbed to the tops of their masts. This was an important factor in times of war or piracy.

One thing that Dubay doesn’t understand is that the difference between water being level, and its supposedly being flat. A level ocean, on the Earth’s surface, means that the surface is the same distance from the earth’s centre of gravity. It has run “downwards” (that is, inwards) as far as it can go!

And the Earth is not “wobbling and hurdling” – its slightly elliptical path around the sun is quite steady and not at all ‘wobbly’ – there is nothing to make it wobble, despite Dubay believes. Again, he simply doesn’t understand the ideas that he is criticising. 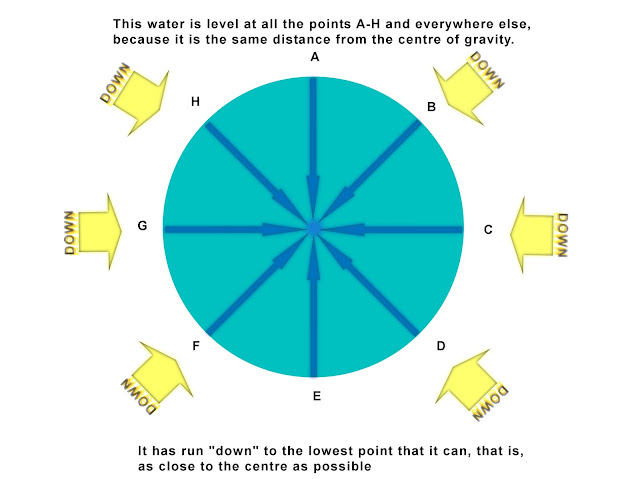 For those who understand geometry, the surface of the water is perpendicular to the centre of the earth at every point.