43) “If  Earth was a ball there are several flights in the Southern hemisphere which would have their quickest, straightest path over the Antarctic continent such as Santiago, Chile to Sydney, Australia. Instead of taking the shortest, quickest route in a straight line over Antarctica, all such flights detour all manner of directions away from Antarctica instead claiming the temperatures too cold for airplane travel! Considering the fact that there are plenty of flights to/from/over Antarctica, and NASA claims to have technology keeping them in conditions far colder (and far hotter) than any experienced on Earth, such an excuse is clearly just an excuse, and these flights aren’t made because they are impossible.”

As so often the best reply to Dubays's claim is "Do your own research!"

One of the commenters at Metabunk is an airline pilot. Here is his post about flying an Antarctic route:


Abishua, I flew the QF28 flight from Santiago to Sydney a few days ago. I mean physically flew the aircraft, a 747.We flew within sight of the Antarctic, down to 71.5 degrees south. We can go further south on that route but are limited to 71.5 south by lack of line of sight to the ATC communications satellites over the equator.That in itself should tell you the world is not flat, however, can you understand that airlines are commercial entities, where containing fuel costs are paramount to maintaining profitability?Santiago and Sydney are almost on the exact same latitude of 34'00 south. Sydneys Longitude is 151 deg East and Santiago is at 72 deg W. To fly between the two cities I must cover 137 lines, or degrees of longitude.. Correct?The flat earth model has the distance between degrees of longitude becoming much larger as we approach Antarctica. This greatly increases the east-west distance the aircraft must fly to cover those 137 degrees of longitude. In this case the flat earth model makes it physically impossible to fly the distance on a full load of fuel.Yet that is what we did. Because lines of longitude converge at the pole, the distance between them is shorter the closer you get to the pole. This is how great circle routes works and why airlines always fly an approximation of a GCR. The do get modified by winds and airspace restrictions.Below are two representations of the route we followed. 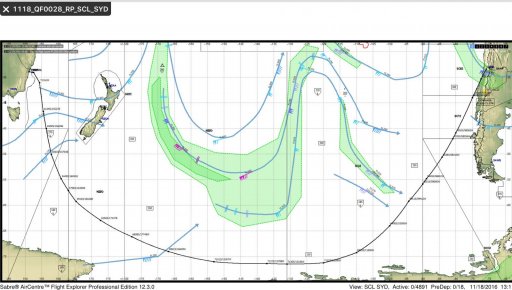 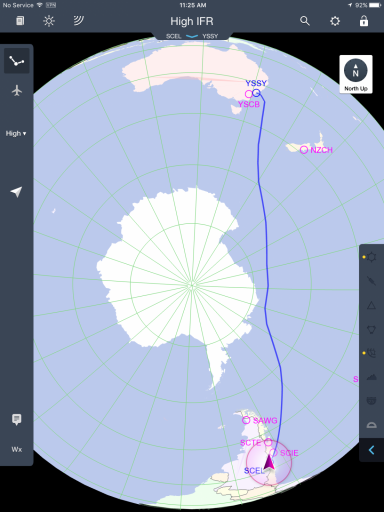 The first does not depict the lines of longitude as they are or even as the FE model presents them. The do show the jets streams however.
The second is the actual route we flew, which was basically a straight line GCR modified for the winds on the day, and the 71.5S constraint. It depicts the lines of longitude converging at the pole, making this route the shortest way.
It may not be congruent with your beliefs, but that's the way we fly between these two cities, and we do it because any other way would cost too much fuel.
Sorry the FE does not exist. That's all there is to it.

I'd recommend that you the whole of discussion "How Antarctica debunks the Flat Earth" for many explanations, videos and illustrations:

And here is another thread worth reading:


To debunk the Flat Earth theory, you can just use Sydney to Santiago, Chile, Quantas flight 27, 7000 miles. 12 hour flight. This flight would be impossible on the Flat Earth model, requiring the plane to travel at twice the speed of sound.

Please read the rest , for many examples of the evidence that Eric Dubay claims doesn't exist!

More on this claim:


“So, why do planes not fly over Antarctica very much? There's a number of reasons (seeWikipedia/Polar Route):

Most cities simply don't have a Great Circle that lies over Antarctica.

Airlines don't schedule those flights - for instance, because nobody wants to go from Wellington to Cape Town.

Winds; the great circle isn't the full story. In terms of fuel and time, the shortest distance might be one that takes you out of the winds.

Furthermore, there are a few operational considerations. For instance, extended flight over those regions might cool down the fuel too much.

Range of the airplanes. For instance, the Airbus A380 has a range of 15700 km and could easily make it. A Boeing 747-400 has range 13450 km and could make it as well. However, for a place like the Falklands these are simply too much. I see that the Falklands will soon fly with LAN airlines to Saint Helena, and half their fleet is Airbus A320 family. Which means that the range is 3100 - 12000 km. You'll note that, when we incorporate waiting times before landing, turbulence, weather conditions and so forth, this is only barely enough to make the flight from Port Howard to Sydney. “ Daimonie

8. The ice wall of doom! Anyone may book a flight to or over Antarctica, just as tens of thousands of people do annually. A380 takes the polar route to Sydney. http://videos.airbus.com/video/iLyROoafIlXu.html .*"The crew takes in spectacular views of Antarctica"*

Tours in The Antarctic http://www.lonelyplanet.com/antarctica/tours"over 45 thousand people visited Antarctica during the recent Argentine summer: it's a seven times growth in the last 16 years. " (2009)

U.S. Department of State- Open Skies Treaty- http://www.state.gov/t/avc/trty/102337.htm"...is one of the most wide-ranging international efforts to date promoting openness and transparency of military forces and activities. "
Antarctic Treaty

System http://en.wikipedia.org/wiki/Antarctic_Treaty_System "establishes freedom of scientific investigation and bans military activity on that continent. " "in the interests of all mankind that Antarctica shall continue forever to be used exclusively for peaceful purposes and shall not become the scene or object of international discord."

http://www.usap.gov/jobsAndOpportunities/ the USAP deploys roughly 3,000 people to Antarctica every year to conduct scientific research, or provide support to researchers through the operation and maintenance of the research stations and vessels.

“False claim.
Here it is again, the infamous flight Santiago-Sydney. And yet again, the map problem (Point 34 and  Point 35). We have previously seen that the azimuthal map of earth is absolutely worthless  ((when it comes to angles, surface-areas or even distances that are not measured directly through its centre. 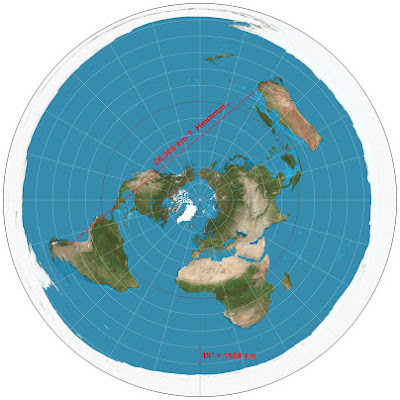 So, if you want to debunk the globe, please draw your lines on a globe and show that things don't add up. If Mr. Dubay had actually done that, drawing a straight line on a globe from Sydney to Santiago, he would have seen something like this: 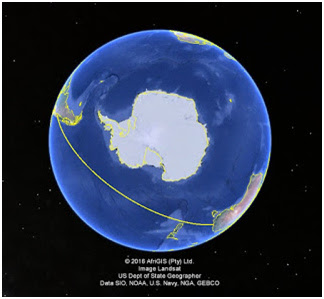 We see a line with a measured distance of roughly 11,360km (~7,050sm). Coincidentally, this line/distance is perfectly consistent with Qantas Air flights taking off three times a week and directly connecting both of these locations. The "shortest, quickest" route southernly passes New Zealand while it is clearly nowhere near the mainland of Antarctica. As of today, the flight Ident is QFA27 and you can check it here:
https://flightaware.com/ 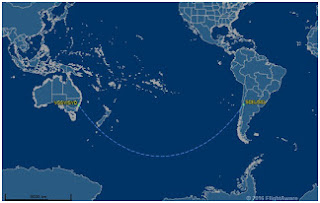 Also, if you looked closely, you could see that between Sydney/Melbourne and South America and South Africa there is not one direct connection that would lead you directly over the Antarctica mainland. Even Auckland-Johannesburg wouldn't do that.

To be honest, there would be ONE connection that actually had to directly cross Antarctica with less than 5° away from the south pole. It's Perth-Buenos Aires. Well... nobody flies that route. So, here's the question: How many people can you find to at least once a week fill a large passenger aircraft on that route so Qantas would not direct it over its normal international flight hubs Sydney/Melbourne? If you can explain how Qantas could actually make real profit out of this direct connection, you might have an argument (leaving out the contradictory flat earth distances, of course).

For more on how to calculate the distances and routes on a flat and round earth: