10)  The London and Northwestern Railway forms a straight line 180 miles long between London and Liverpool. The railroad’s highest point, midway at Birmingham station, is only 240 feet above sea-level. If the world were actually a globe, however, curving 8 inches per mile squared, the 180 mile stretch of rail would form an arc with the center point at Birmingham raising over a mile, a full 5,400 feet above London and Liverpool.”

Are you serious, Mr Dubay? Do you really think that the curve of the earth between two cities means that the land midway between them is somehow "higher" than either city?

Do you not understand basic geometry?   Apart from any hills or valleys, both cities are about the same distance above mean sea level, or above the centre of the Earth’s globe.

So is the mid point between them!

At any one point “higher” or “lower” means further from the centre of the earth, or closer to it (ignoring tiny negligible variations owing to spin or tidal effects). This should be enough to show that this is absurdity. 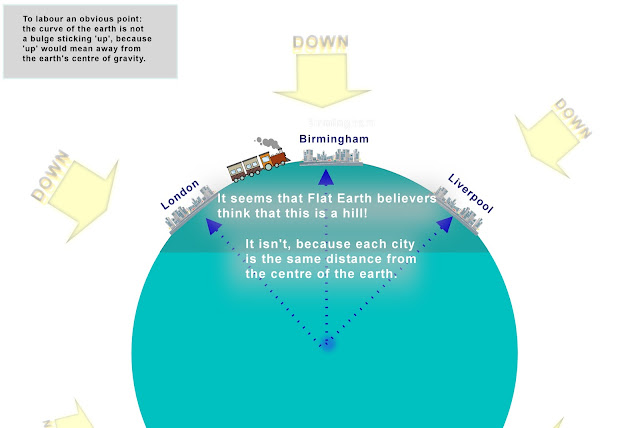