47) “On  a ball-Earth Johannesburg, South Africa to Sao Paolo, Brazil should be a quick straight shot along the 25th Southern latitude, but instead nearly every flight makes a re-fueling stop at the 50th degree North latitude in London first! The only reason such a ridiculous stop-over works in reality is because the Earth is flat.”

Don't fact check Dubay- he depends on it.

"Except that we just learned that the flight from Johannesburg to São Paulo is actually flown. Perhaps, when that point was first thought up by flat-earthers, it was true. Then it would mostly mean that there was a lack of feasibility of long-range flights from south africa to south america.

Perhaps you remember that the sum of two sides of a triangle is greater than the third side (Euclid).
If you look on the 'flat earth map' shown here - euclidean geometry is valid on a flat plane - then you see a triangle between the three. You immediately see my point; the distance between Johannesburg-London plus the distance between London - São Paulo must be greater than that between Johannesburg and São Paulo. It doesn't make sense on a flat-earth map, either!”

#47 False claim.
a) South African Airways fly directly from Johannesburg to Sao Paolo and back (as of now: Flight SAA223). Straight over the Atlantic Ocean, once every day.
https://flightaware.com/
b) The flight duration doesn't work on the flat azimuthal map (map problem Point 34 and  Point 35). 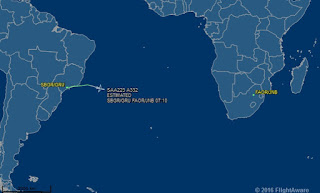