103) “There are several constellations which can be seen from far greater distances over the face of the Earth than should be possible if the world were a rotating, revolving, wobbling ball. For instance, Ursa Major, very close to Polaris, can be seen from 90 degrees North latitude (the North Pole) all the way down to 30 degrees South latitude. For this to be possible on a ball-Earth the Southern observers would have to be seeing through hundreds or thousands of miles of bulging Earth to the Northern sky.”

The consequence of a star’s declination is that at some point during the night it will run exactly through the zenith (highest point in the sky) of a given location with the same geographical latitude as the declination. When the star reaches that point, it is only logical that on a sphere you had to go at least 90° away from your point of observation for it to be invisible (obscured by earth). 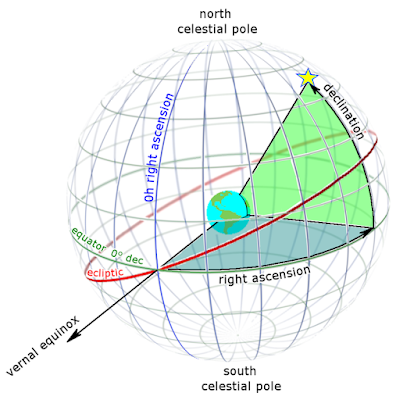 The southermost star of Ursa Major (AKA “Big Dipper + a little more”) is Tania Australis. It has a declination of roughly +41.5. Look at the night sky from Cleveland, Ohio (41.5°N). At some point during the night (or day depending on season), Tania Australis will go exactly through the zenith from your point of observation. And that means, in order to NEVER be able to see it, you have to go down at least 90° further south, which gives you roughly 48.5° South.

The northermost star of Ursa Major “h UMa” has a declination of roughly +63°. So in order to never be able to see it, you have to go down to roughly 27° South. Most stars of this constellation lie under +60°. That gives you the value of 30°S, where Mr. Dubay claims it should be obscured by “thousands of miles of bulging Earth”.

I’m guessing the two factors he didn’t take into account were the earth’s rotation and the different span of arc that each constellation has. When you’re standing in, say, Johannesburg (28°S), and following the above argumentation, Ursa Major should not be visible all the time, but at some point it will be ROTATING INTO YOUR VIEW. Let’s observe the night sky from Johannesburg, looking due north: 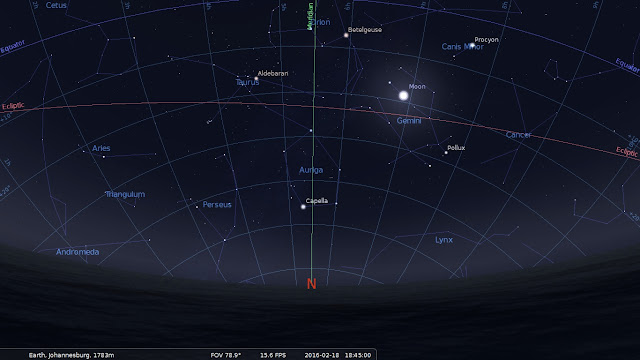 Hmmm. Ursa Major is nowhere to be seen. Let’s wait for a couple of hours and look again: 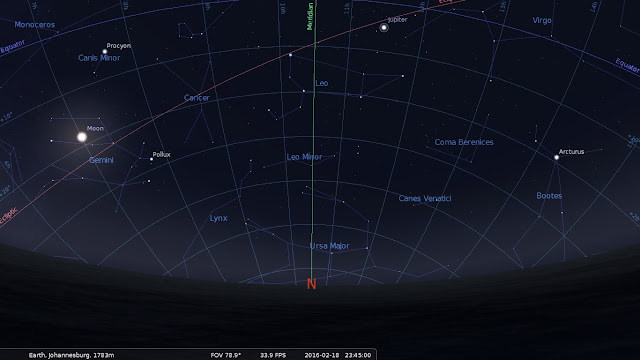 There it is, Ursa Major including the “big dipper” can be seen clearly, only with its northermost star barely obscured (keep in mind, JoBurg is at 1783m elevation). That’s exactly what the spherical model predicts.
(Credit goes to "Stellarium" for the above photos) 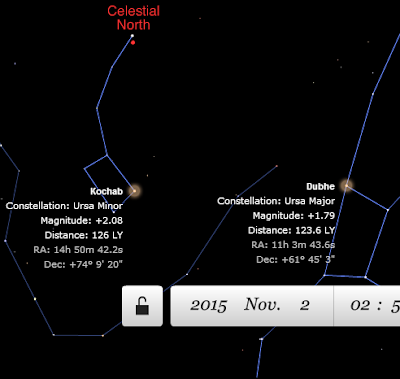 Via a star map.

The argument here is that Ursa Major is 'very close' to polaris, but visible down to 30 degrees south latitude. (Polaris is visible to 23-ish.)

Close, of course, is a relative term. It's actually quite a bit away, as we can see in the image to the right. The angle difference is roughly 13 degrees, which mean's I'd expect ursa major to be visible down to roughly 36 degrees south latitude.

It's important to note that the earth is at a tilt, especially for astronomical purposes. The same, of course, can be said for celestial navigation purposes.

Watching the clear night sky can be quite fun. I still can't tell one constellation from the next, but I got pretty good at spotting Mars last year.