148) “Quoting “Earth Not a Globe!” by Samuel Rowbotham, “It is found by observation that the stars come to the meridian about four minutes earlier every twenty-four hours than the sun, taking the solar time as the standard. This makes 120 minutes every thirty days, and twenty-four hours in the year. Hence all the constellations have passed before or in advance of the sun in that time. This is the simple fact as observed in nature, but the theory of rotundity and motion on axes and in an orbit has no place for it. Visible truth must be ignored, because this theory stands in the way, and prevents its votaries from understanding it.””

I’m really not sure what Rowbotham is claiming here. So I’m unable to check whether it is true, at all. Nor can I see what it would prove if it turned out to be some true statement. Can anyone explain the point more clearly?

Ok: How long is a day? Obviously 24 hours. That is the time it takes for the sun to reach the same longitude after 1 rotation of the earth. The big problem begins with the orbit of the earth:

When the earth has travelled a certain distance on its orbit after one day, would it have to rotate exactly 360° to complete one day, to look at the sun with the same angle?

Obviously no. Because it would have to rotate a little bit more to compensate for the distance it has travelled. Because one year is 365 days long and a circle has 360° it follows that the earth has to rotate roughly one extra degree to complete one day. That means, an exact 360° rotation of the earth doesn't take exactly 24 hours, but a little less.

In fact it takes 23 hours and 56 minutes. That's what's called a sidereal day: 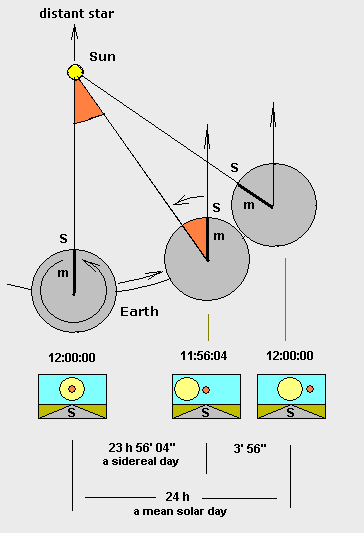 So we're 4 minutes off a 360° rotation each day. Let's calculate how much that offset is after roughly half a year (182 days):

So, yes, after roughly half an orbit we are close to a half-day off in our rotation. And that is the reason why "noon" after exactly 6 months is still "noon" because we are now looking at the sun from the opposite side! But only because geometry implies that there is a difference between a "day" and 360° rotation.”( In reply to point 112.)