108) “The mariner’s compass is an impossible and non-sensical instrument for use on a ball-Earth. It simultaneously points North and South over a flat surface, yet claims to be pin-pointing two constantly moving geomagnetic poles at opposite ends of a spinning sphere originating from a hypothetical molten metal core. If compass needles were actually drawn to the North pole of a globe, the opposing “South” needle would actually be pointing up and off into outer-space.”

Incomprehension of the model
Nobody says that compasses always point towards the poles. They align along magnetic field lines.  When you place a compass at equal distances to both ends of a bar magnet, the compass needle will not point at one pole, but will align itself parallel to the magnet. That only works with two poles establishing a magnetic field: 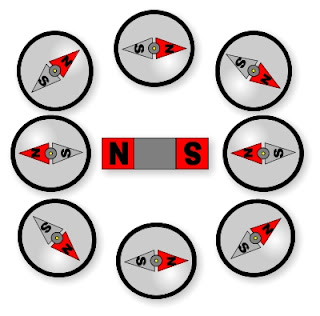 Timescales are a myth

The movement of the magnetic poles has a sufficiently larger timescale than that of a sailing trip. Or several of them. Or a thousand years of them.

Furthermore, a compass doesn't point towards the pole. It points along a field line. A field line isn't an actual line, but it is a good way to show them. Essentially a magnetic field is a continuous variable, but if you want to draw them you use field lines. Iron fillings, such as depicted to the right, turn into tiny bar magnets themselves. This means they have their own field, so the filings close to each other line up to the effective field, which is simply the sum of that of the other filings plus the big bar magnet's field. The reason they do line up is simply minimisation of energy - the driving principle of most of classical mechanics, but also of quantum mechanics, thermodynamics, and basically most of physics.