138) “Another favorite “proof” of ball-Earthers is the appearance from an observer on shore of ships’ hulls being obfuscated by the water and disappearing from view when sailing away towards the horizon. Their claim is that ships’ hulls disappear before their mast-heads because the ship is beginning its declination around the convex curvature of the ball-Earth. Once again, however, their hasty conclusion is drawn from a faulty premise, namely that only on a ball-Earth could this phenomenon occur. The fact of the matter is that the Law of Perspective on plane surfaces dictates and necessitates the exact same occurrence. For example a girl wearing a dress walking away towards the horizon will appear to sink into the Earth the farther away she walks. Her feet will disappear from view first and the distance between the ground and the bottom of her dress will gradually diminish until after about half a mile it seems like her dress is touching the ground as she walks on invisible legs. Such is the case on plane surfaces, the lowest parts of objects receding from a given point of observation necessarily disappear before the highest”.

The claim made here is simply false. True, if a person was very far away, you might not be able to make out their feet – or their hands or other parts. But there’s no evidence that feet vanish first in the way claimed.

As to evidence, here are some stills from this video: A video showing the curvature of the earth

I’ve put them together as a 'blink comparison' animation so you can see the effect of moving from a slightly elevated position down to sea level, on our view of the island of Ailsa Craig. You can see the whole unedited process in the video itself.

And here are the stills so you can study them: 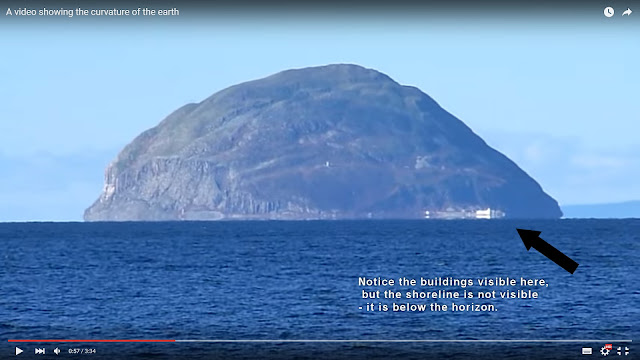 From a little above sea level 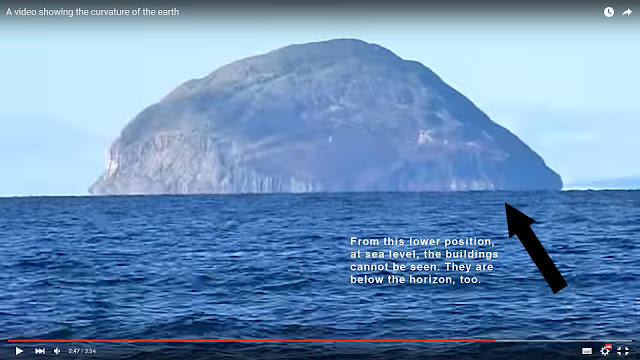 And from down at sea level.

This is discussed in several places here;

Anyway, the case is similar to point 3, and many of us, myself included, have seen the curvature of the sea hide first the base and then the tops of cliffs as we sailed out over the curve. I live near the coast of Kent and have frequent opportunities to see this effect for myself.

And look at this photograph of the world’s largest sailing ship – see how its hull is hidden below the horizon. The sea is curved.

Here again are some links mentioned before:

Source
and this one, by an amateur – more photos and an explanation here

For more on this see the reply to point 138 later.

And here’s another video showing a sailing vessel sinking below the horizon.
Posted by Inti at 10:11