127) “The fact that the Sun and Moon’s reflections on water always form a straight line path from the horizon to the observer proves the Earth is not a ball. If Earth’s surface was curved it would be impossible for the reflected light to curve over the ball from horizon to observer.”

Typically, Mr Dubay just claims that this is true , and expects us to believe him, There is no evidence and no argument, just what Dubay says. Odd, for someone who is happy to claim that a substantial proportion of the world’s population is conspiring to lie to the rest of us. Why take him on trust, and not these others.

For a detailed discussion including a description with photos of an experiment you can try for yourself, see here:


Reflection of the sunlight on water

In fact, Mr Dubay has just pointed out an excellent piece of evidence for a curved surface.
So, lets look at the evidence. Dubay says that you’d never get such a reflection on a curved surface, but you would on a flat one.

Right now, I’m looking at a mirrored door across my room. The mirror is flat. There’s a light shining on it at a similar angle to the sun in his photo. Yet I don’t see such a  straight line path, just a direct round reflection of the bulb. So flat surfaces don’t necessarily give such a reflection.  Now I tried the curved surface of a shiny Christmas bauble. Still no path of light.  It may not be the shape of the surface that decides whether there is a line reflection.

In fact, you get such effects when the light scatter off an uneven surface – as here, with the tops of waves catching rays at different angles, or on a wet road, where headlights reflect in a similar path.
Again, you can get a similar effect with light and dark areas behind a water surface in a landscape, like this : 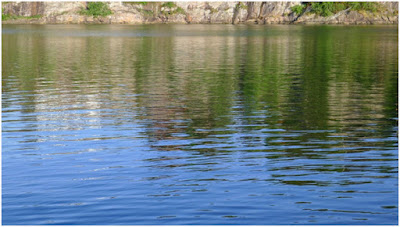 Notice that whenever you get such an reflection, it is from a rough, uneven but somewhat shiny surface.

Only the rays that bounce directly towards us enter our eyes – those to either side “miss”.  So we only actually see those that bounce directly between the light source and our pupils, so that we see a vertical line. This could happen on a flat or slightly curved surface.

So this phenomenon proves nothing, either way.
Posted by Inti at 09:06