143) “People claim that if the Earth were flat, with the Sun circling over and around us, we should be able to see the Sun from everywhere all over the Earth, and there should be daylight even at night-time. Since the Sun is NOT 93 million miles away but rather just a few thousand and shining down like a spotlight, once it has moved significantly far enough away from your location it becomes invisible beyond the horizon and daylight slowly fades until it completely disappears. If the Sun were 93 million miles away and the Earth a spinning ball, the transition from daylight to night would instead be almost instantaneous as you passed the terminator line.”

As I pointed out when discussing point 139, Mr Dubay has made a terrible blunder here, and effectively conceded that the earth is round!

In his second sentence he writes that “once it has moved significantly far enough away from your location it becomes invisible beyond the horizon”. But there can only be a horizon for the sun to disappear over if the Earth’s surface is curved. If the Earth were a flat disk, what would the Sun be hidden behind?  In his world, there can be no horizon.  It would be visible, even if it was only 35 miles up, as he absurdly claims.

I suppose the Sun could did down “under” the disk, so that it only shines on the underside. But then it would be seen to vanish from every point on the inhabited upper plane at the same time. (Draw a diagram if you doubt this )

And we all know that it doesn’t get dark everywhere at the same moment. I’m in the UK and it’s about 11.30 am. If I phone a friend in Los Angeles, they will tell me, quite grumpily, that its about 3.30 in the morning, and I’ve just woken them up! Exactly what you’d expect on a globe, and makes no sense in Mr Dubay’s imaginary world.

And when he suggests that night should fall instantly on a round Earth, it seems as if he has never watched a sunset or sunrise. There is a fair period of twilight because the sun shines upward at a shallow angle through the 60-mile layer of the atmosphere, even when it is below the horizon.

And as Mr Dubay points out himself, the atmosphere is not totally transparent, so the sun’s rays are scattered upwards over the horizon.  If you look carefully, you will often see the Sun illuminating the underside of high clouds as it sets or rise. So a gradual transition is precisely what we expect on a spherical world.

And Dubay has boobed again – he’s pointed out yet more evidence of a spherical Earth – the fact that the shortest twilight, 1 hour and 10 minutes (astronomical twilight), occurs at the Equator, where the sun rises and sets at right angles to the horizon throughout the year. Another experience that makes perfect sense on a globe, and none in Dubay world.

Anyone who travels or has friends overseas knows about time zones.

But on Dubay's flat disk, time zones make no sense.

If the sun was a “spotlight” (very directionally located so that light only shines on a specific location) and the world was flat, we would have seen the sun even if it didn’t shine on top of us (as you can see in the drawing below). The same way you can see the light coming out of a spotlight on a stage in the theater, even though you – the crowd – are in the dark. The only way to create two distinctly separate timezones, where there is complete darkness in one while there’s light in the other, is if the world is spherical. 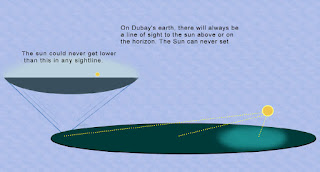 See point 55 for more on this.

More about the moon here: