151) “If Earth were a spinning ball revolving around the Sun it would actually be impossible for star-trail photos to show perfect circles even at the North Pole! Since the Earth is also allegedly moving 67,000mph around the Sun, the Sun moving 500,000mph around the Milky Way, and the entire galaxy going 670,000,000mph, these four contradictory motions would make star-trail time-lapses all show irregular curved lines.”

Here’s the short answer – that is wrong, because the distances involved are so much bigger that these speeds are tiny in proportion. We could not expect to see such movement in less than many centuries.

In the case of the star trails themselves, we are seeing the rotation of our point of view, not real physical movements.

This is a similar mistake to the one about parallax in Point19 . It fails to understand how tiny speeds like 67,000 mph or distances like 186 million miles are compared to the distances to the stars.

Here is the longer version:

As I’ve explained before in Point 149, the speed of apparent change of stars owing to the motion of the Earth round the sun and the movement of the whole solar system within the Galaxy is TINY compared to the distances involved.

Compare these speeds with the corresponding distances:

So it’s not surprising that we can’t see any apparent distortion in start trails form such an unimaginably small change during the 2 hours  exposure of a typical star trail picture. The Earth has only moved about 1/ 186137873 of the distance to the nearst star in that time.

When you are moving sideways in a straight line, the further things are away, the less they seem to move as your viewpoint moves forwards.

The same applies to the other movement mentioned – they are relative to enormously greater distances, and so the apparent change is too tiny to detect in a moderate time.

This a similar mistake to the one about parallax in Point 19 . It fails to understand how tiny speeds like 67,000 mph or distances like 186 million miles are compared to the distances to the stars.

When you look sideways out of a car, at the passing landscape , things close to you seem to move very fast, while distant things seem to move slowly. The uprights post of a fence, close along the side of the road, seem to whizz backwards. Some cows in the middle distance in a nearby field seem to move more slowly, while trees or hills in the distance seem to move backwards more slowly still. All seem to move in a straight line in the opposite direction to you real direction of travel.

That’s an experience we have all had. In the same way, very distant objects like stars seem to move very little indeed.

So why do we see circular start trails? Because we are changing our angle of view, and we all know that this can make distant object seem to move very quickly. Turn your head , and trees or houses in front of you seem to circle in the opposite direction,  very quickly.

Google “star trails” for more on how to take such photos.

By the way, star trails provide a solid proof that the earth isn't a flat disk

3. Star Trails. If Earth is flat, how can billions of people see two different sets of constellations rotating in opposite directions, around two opposite poles? How can people in the southern hemisphere essentially stand in a circle with their backs to each other, and all be facing the same southern constellation? Illustration- 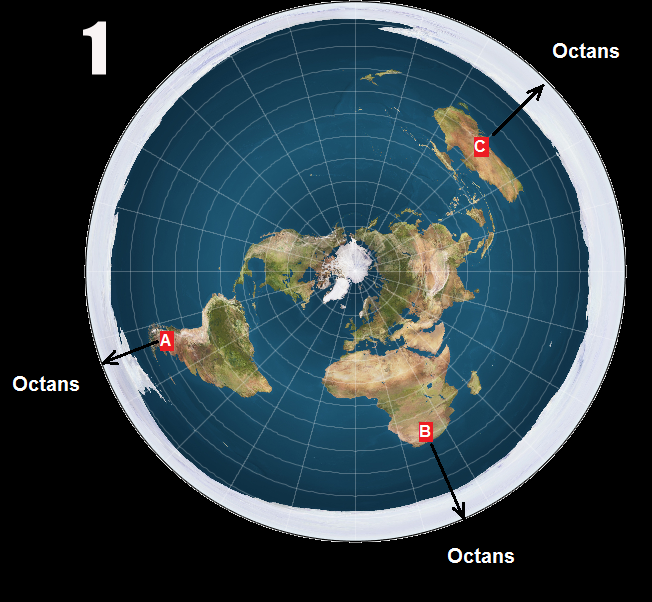 Anyone in the Southern Hemisphere may observe how stars rotate clockwise around the South Celestial Pole, where Polaris, Ursa Minor, Ursa Major, and Cassiopeia are absent -  while anyone in the Northern Hemispshere sees stars rotating counter-clockwise around the North Celestial Pole, where Crux, Centaurus, and Carina areabsent -  On flat Earth, it is geometrically impossible to see these two completely different skies, rotating in opposing directions around two different poles.Google "star trails" to see thousands of photo and video examples from around the world, and the star rotation direction always corresponds with the polar hemisphere. From the Equator, you can see stars rotating simultaneously around both, opposite poles. Here is a 360 degree panoramic timelapse showing stars simultaneously rotating clockwise and counter-clockwise-