173) “NASA has several alleged photographs of the ball-Earth which show several exact duplicate cloud patterns! The likelihood of having two or three clouds of the exact same shape in the same picture is as likely as finding two or three people with exactly the same fingerprints. In fact it is solid proof that the clouds were copied and pasted in a computer program and that such pictures showing a ball-shaped Earth are fakes."

On the subject of photo fakery, have a look at this? 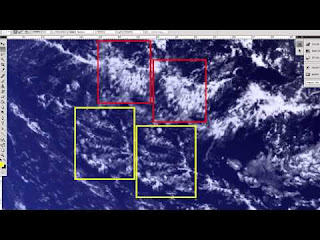 It’s the picture  that Dubay posts, and it’s clear evidence of wrongdoing – but by Mr Dubay or other flat-earthers, not NASA.

Wait – look around the edges of the picture.

That’s the toolbars, menu etc of Photoshop. So is Dubay claiming that the people who allegedly pulled off a massive fraud are so stupid that they post a screenshot that gives the whole thing away?

Or is it more like the intellectual level of people like Dubay and those no-nothing friends here who still think rockets can’t fly in a vacuum because they push against the air (they don’t!) and can’t understand (or find out ) how aircraft work.

It’s a fake fake by a fool!

As I said in point 172, I notice that Dubay sometimes attributes diabolical cleverness to “the conspiracy”, far beyond what is actually plausible or technically possible. Then he claims that they are  so stupid that they blow the whole thing!

Here, he is either being dishonest -  faking a fake - or he's so gullible that he's been taken in himself.
Posted by Inti at 15:52