144) “Pictures of the Moon appearing upside-down in the Southern hemisphere and right-side up in the North are often cited as proof of the ball-Earth, but once again, upon closer inspection, provide another proof of the flat model. In fact, time-lapse photography shows the Moon itself turns clockwise like a wheel as it circles over and around the Earth. You can find pictures of the Moon at 360 degrees of various inclination from all over the Earth simply depending on where and when the picture was taken.” 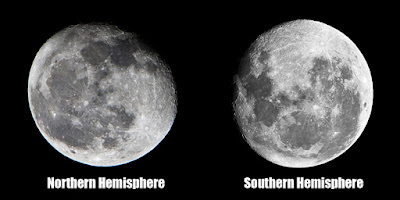 First, the upside-down moon in the southern hemisphere is just what we would expect on a globe.

Think for a second, Mr Dubay! If an Australian’s head is pointing to the South Pole when they look at the moon and a Moscow resident’s head is point roughly North at the same time (same longitude), the image they will see will be close to 180 degrees rotated, won’t it?

And a person on the equator will be a something like 90 to someone on either pole, so they will see the moon ‘sideways’

So, yes, “You can find pictures of the Moon at 360 degrees of various inclination from all over the Earth simply depending on where and when the picture was taken.” And that’s what you’d expect on a spherical Earth. The Angle varies with the latitude. And the angle of the moon lines up perfectly with the expected angle at any given latitude, giving more evidence of the globular shape.

Now, here’s the really beautiful bit. Dubay has posted photos refuting his own claim that the Earth is a flat, smooth semi-transparent disk in points 131 and 135. Look closely!

Mr Dubay’s picture is a bit small and blurry.

Here is a much clearer photo of the moon.

And no, it’s not ‘fake’. No “taking anything on trust” is required. I’ve seen the same thing myself clearly enough through a fairly cheap telescope, and so can you. Amateur photo gear will let you take the same picture.

Or you can use Dubay’s pictures if you insist, and zoom in onscreen (Press Ctl + in Chrome)

So look at the shadow from 12 o’clock to about 2 o’clock on the left hand image, and 9 to 11 on the right hand photo.

Can’t you clearly see the curvature – see how the shadow deepens quite  smoothly, a progressive increase in darkness rather than a blurry edge as you get in shadows on a flat surface. 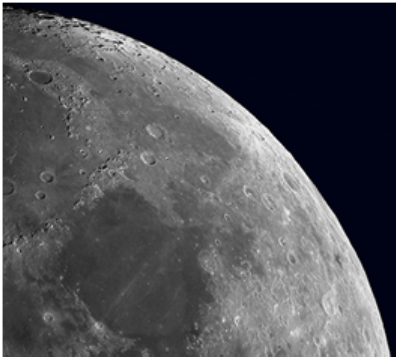 See how exactly this is like shadows on a ball that is brightly lit by a lamp to one side and in front  the ball. You’ll see the same appearance.  You can see it even more clearly down the left side of the Universe Today photo I’ve linked to above.

And again, you can see this for yourself. No chance for an imaginary conspiracy to fake it! 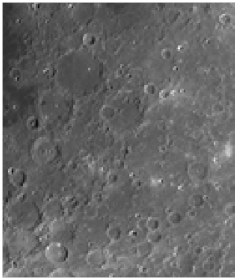 Now look closer. Can you see the circular craters on the moon. See how they appear circular when they are near the centre of the moons apparent disk, 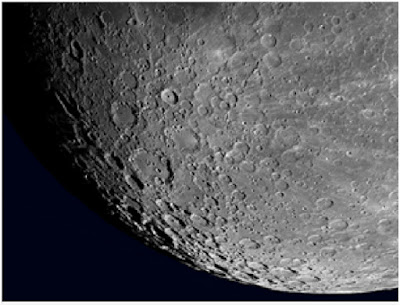 See the clear elliptical shape of  circular craters , getting narrower as they get closer to the edge.

This is also visible in the moon photo’s Mr Dubay gives us himself, at 1  to 2 o’clock in Dubay’s left hand image, 9 o’clock in his right hand photo. 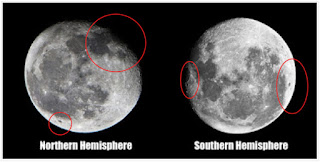 I’ve enlarged his photo and circled the best examples, but otherwise this is Dubay’s unaltered image, as you can check.

In the middle, the craters look like circle, around the edge they become ellipses. That’s exactly how cirlcels look on the surface of a ball, Try it with a white ball and a marker pen, if you still doubt it.

So there it is. Clear, indisputable evidence that the Moon is a spherical, cratered, rough-surfaced world , not a mystical translucent disk. Evidence you can check whenever you like!

You probably shouldn’t have posted those pictures, Mr Dubay…

By the way: If you want Mr Dubay’s really pathetic attempt to explain this away, see Point 174.He has claimed that the appearance of the craters and mountains on the moon is just a trick of the mind, like imagining we see patterns in tree bark.” Look at this, (and hundreds of other highly detailed unambiguous photos by amateurs and progfessionals alike), or get your own telescope, and tell me this is just an illusion.)

If you'd like more, here for your convenience is the reply to this
from http://200proofsearthisnotflat.blogspot.co.uk/2016/02/debunking-dubay-140-149200.html

Incomprehension of geometry
Following an orbit around earth, it is a geometrical fact that the moon has to turn during one night, relative to the horizon. When you observe it from earth and take its orbital plane as axis, however, it doesn't turn more than 1° during one night. It must have apparent "rotation" relative to the horizon, but that's because the orbit spans an arc across the sky. At the equator it rises top-up in the West... 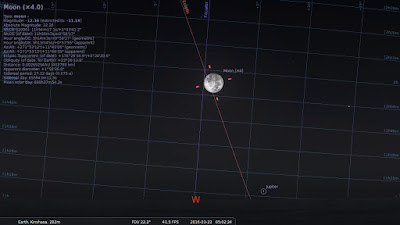 ... and sets bottom-up in the East (roughly) 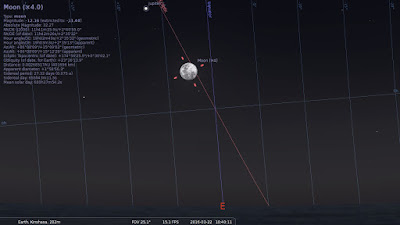 That doesn't mean that it's rotating. It only means that your side of reference has turned 180°.﻿ It's apparent "turning" that you can observe over longer periods of time is called libration, which is a consequence of the moon's elliptical orbit, its 5° offset to the ecliptic, 1.5° axial tilt and your observing position (with 23.4° axial tilt). It oscillates over the course of one month and the moon will expose roughly 60% of its surface during one cycle. Never more than that.
(Yes, I know, this is a NASA-animation. For a time-lapse that anyone can do in his backyard, see #131)
This phenomenon is in no way contradictory to the globe earth model; it is in fact a logical geometrical consequence of the earth's & moon's orbits.
Posted by Inti at 11:01

Email ThisBlogThis!Share to TwitterShare to FacebookShare to Pinterest
Labels: moon, moon upside down