131) “NASA and modern astronomy maintain that the Moon is a solid, spherical, Earth-like habitation which man has actually flown to and set foot on. They claim the Moon is a non-luminescent planetoid which receives and reflects all its light from the Sun. The reality is, however, that the Moon is observably not a solid body, it is clearly circular… (more in a moment)

False claim
Not only are the moon's phases always perfectly consistent with the current position of the sun, its spherical shape is easily evidenced by radar, the shadow print of craters at the moon's edge (please grab a pair of binoculars and see for yourself)... 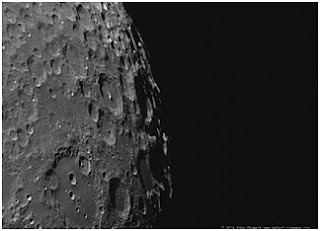 ...or by simply taking photos of the moon over the course of a month and stacking them into a time-lapse (the phenomenon is called libration). Video explanation available here.

There's also a mass of easily reproducible, unambiguous amateur photo evidence in point 144 that the moon is a solid, crater-pocked sphere.

Just like the moon reflects sunlight on earth, so does earth reflect sunlight on the moon. That explains how even the areas that do not receive direct sunlight can be visible.

“but not spherical, and not in any way an Earth-like planetoid which humans could set foot on. In fact, the Moon has been proven largely transparent and completely self-luminescent, shining with its own unique light.”

Proved? Who proved it, when, and how? Mr Dubay doesn’t say, as usual. He expects us to take his word for it, as usual.

When Mr Dubay raised more of his moon madness back at Point54, I pointed out that if the moon is not a fairly distant sphere, but a disk circling close to a flat earth, we would have to see it as an ellipse most of the time. 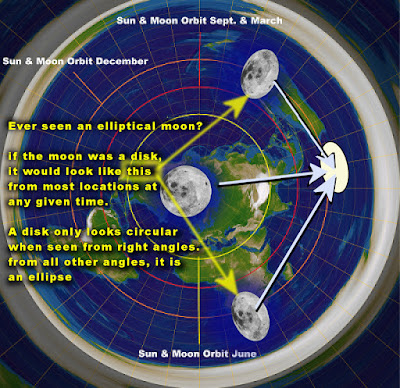 In this point and the following ones about the moon, the irrationality and magical thinking of Dubay’s claim becomes very obvious.

If the moon is a disk, but off to one side of the earth’s disk, why is the shadow of the earth in eclipses not an ellipse (roughly oval), rather than the circle we see? That is the shape of shadow we get from a disk seen art an angle.

Only a sphere casts a circular shadow at every angle! That's basic geometry. Why is the moon invisible below the horizon in some places , at a given time, while it is high in the sky elsewhere at the same time?

By Dubay’s picture of the system, this couldn’t happen.

The fact is that the moon landing is real, and can be independently verified. That the Soviets accepted it should tell you a lot, if you have any idea of the political circumstances of the space race.

Of course, you don't have to take their word for it. Even the TV series `The Big Bang Theory' has featured some evidence of the moon landing. (Thanks to  Daimonie)


More on the genral topic of the moon:
https://www.metabunk.org/claim-the-moons-shadow-during-the-solar-eclipse-disproves-sphere-earth.t8995/#post-209415