137) “Another assumption and supposed proof of Earth’s shape, heliocentrists claim that lunar eclipses are caused by the shadow of the ball-Earth occulting the Moon. They claim the Sun, Earth, and Moon spheres perfectly align like three billiard balls in a row so that the Sun’s light casts the Earth’s shadow onto the Moon. Unfortunately for heliocentrists, this explanation is rendered completely invalid due to the fact that lunar eclipses have happened and continue to happen regularly when both the Sun and Moon are still visible together above the horizon! For the Sun’s light to be casting Earth’s shadow onto the Moon, the three bodies must be aligned in a straight 180 degree syzygy, but as early as the time of Pliny, there are records of lunar eclipses happening while both the Sun and Moon are visible in the sky. Therefore the eclipsor of the Moon cannot be the Earth/Earth’s shadow and some other explanation must be sought.”

I find it hard to believe that Dubay is really making such bizarre claims. Is he really going to pretend that we can see an eclipse, with the sun’s apparent disk being covered by the dark outline of the moon in one part of the sky, while at the same time we could see the sun and/or the moon in another part of the sky? Garbage.

Citation please, and a vague unsubstantiated mention of pre-scientific reports from “the time of Pliny” (not by Pliny himself, notice) won’t convince anybody  rational.

Apparently old Mr Rowbotham is at it again with this claim. He says that “ The Greenwich Royal Observatory recorded that “during the lunar eclipses of July 17th, 1590, November 3rd, 1648, June 16th, 1666, and May 26th, 1668 the moon rose eclipsed whilst the sun was still above the horizon.” “

Which is very odd, considering that the Greenwich Royal Observatory was not founded until 1675, nearly thirty years after Rowbotham claims it observed this! A level of ‘reliability’ that we have come to expect form that source.

The explanation given is that, because both can be visible in the sky, this can't happen. As often, I disagree.

There is a short time where a mirage would be able to show the moon, from the penumbra, in part where it is still day. A mirage isn't even needed; there is just a small timespan near sunrise/sundown where your field of vision carries over the horizon, even more so if you're high up. In fact, it turns out to have happened inAugust, 1989.

A lunar eclipse implies that the sun and moon have to be 180° apart from each other as seen from any point of observation on earth. 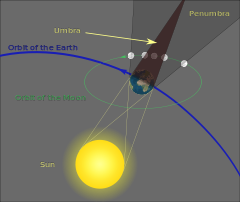 (picture not to scale!!)

Atmospheric (astronomical) refraction increases the closer you get to the horizon, where the deviation of light is slightly greater than the apparent diameter of the sun (0.53°).
https://en.wikipedia.org/wiki/Atmospheric_refraction#Astronomical_refraction

Thus, for a short period of time it is absolutely possible to see both the sun and the moon during a lunar eclipse. No lunar eclipse in the history of mankind has been observed at noon and that is because this is absolutely impossible.

OK, that seems to be the end of moon madness for now.
Posted by Inti at 09:56