176) “When NASA’s images of the ball-Earth are compared with one another the coloration of the land/oceans and relative size of the continents are consistently so drastically different from one another as to prove beyond any reasonable doubt that the pictures are all fake.”

Excuse me for repeating refutations from point 172, but if Mr Dubay repeats his claims often, I'm forced to do that same in reply.

Although it was not addressed to Dubay's claims, there's an interesting response to this point here:: https://www.metabunk.org/debunked-blue-marble-photos-show-a-changing-earth.t6616/

"But what of the more unusual suggestion that the images are fake, because they show the continents being different sizes. Like many such things, it's all about perspective, and the way our brains work. We look at these images of the Earth, and our brain thinks of it as a flat object. You'd think if you get close to something, then it will get bigger, but not change shape. But this breaks down for three dimensional objects. If you get close to a globe, then you can see less of it, so the visible objects seem a lot bigger relative to the visible disc of the globe. The part of the globe in the middle is also a lot closer to your eye (relative tot he edges) so seems bigger, like it's bulging out more than it actually is. You can verify this yourself with a household globe and your eyes (or a camera)

When the camera is just a few inches from the globe, then North America seems to take up nearly all of the hemisphere. But as the camera moves back, then you can see more of the globe, and so the true relative size can be seen."

As for the different colour and contrast in images, Metabunk's Matt West explains:

The contrast color saturation is something you can arbitrarily pick after the raw image is created. Most consumer cameras boost this to make the images look better, but the more washed out image is the more realistic. Here, for example, I've adjusted the contrast and saturation of the 2015 DSCOVR image: 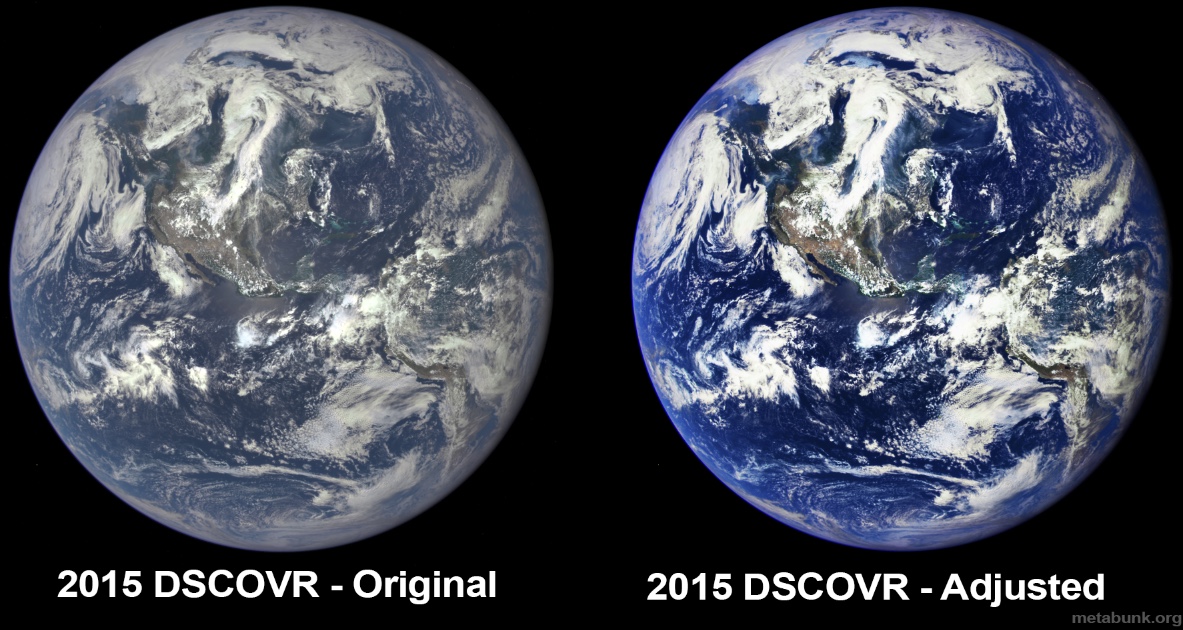 It's the same image, just adjusted to be more pleasing to the eye, in a similar way to what was done with the 2002 images.

Each image is unaltered, with just three default camera settings ("P" mode on the two Canon cameras). The histogram in the corner of each image shows the brightness distribution across the image. Notice the S110 has the most saturated colors with dark yellows and reds, but the iPhone has the deeper contrast in the blues and greens. The Canon 7D seems almost washed out by comparison, but it's actually the most accurate of the three. A photographer can take this, and adjust it any way they like afterward.

So given the vast difference between the camera systems of the 1967, 1972, 2002 and 2015 images, there's simply no way to make any kind of direct comparison between them.

More interesting details about how such pictures are created at https://www.metabunk.org/debunked-blue-marble-photos-show-a-changing-earth.t6616/


And if you would like to work out for yourself how much of the Eath we should see from space , look at this:

How to calculate the visible fraction of the Earth [e.g. 1972 Blue Marble, Apollo 17]