171) ”NASA claims there are upwards of 20,000 satellites floating around Earth’s upper-atmosphere sending us radio, television, GPS, and taking pictures of the planet. All these supposed satellite pictures, however, are admittedly “composite images, edited in photoshop!” They claim to receive “ribbons of imagery” from satellites which must then be spliced together to create composite images of the Earth, all of which are clearly CGI and not photographs. If Earth were truly a ball with 20,000 satellites orbiting, it would be a simple matter to mount a camera and take some real photographs. The fact that no real satellite photographs of the supposed ball Earth exist in favor of NASA’s “ribbons of composite CG imagery,” is further proof we are not being told the truth.”

Mr Dubay says “ If Earth were truly a ball with 20,000 satellites orbiting, it would be a simple matter to mount a camera and take some real photographs.”

Yes, Mr Dubay, and they do, many of them. And then you claim that the photos are fake. Make your mind up – do you want photos, or not? Mind you, you don’t give any evidence that we can check that – you just say so and expect us to take your word for it.

Since Mr Dubay doesn’t like NASA, here’s one from the Japan Aerospace Exploration Agency.
http://www.isas.jaxa.jp/e/snews/2004/0519_new.shtml

And the European Space Agency
http://www.esa.int/spaceinimages/Images/2015/04/Earth_seen_by_Meteosat

And here are both Whole Disk and composite pictures from NOAA
http://www.goes.noaa.gov/

In order to pretend that all satellite  pictures are fake, Mr Dubay says that many of them are composites. Know what – just for once he is right!

But what is a composite? Is it a fake? Well, no.

The word composite means a photo created by stitching a number of existing pictures together.

Composite photos are on standard method of getting large, high resolution photos of large objects, particularly when those objects are close to you and you can’t “step back”.

Have a look at Google Street View. You can see that the photos they use are composites - often you can see where they were stiched together. But is that evidence that those streets don't exist? Check your own address- is it shown as it was last time Google's photo vehicle passed by?

Before we look at satellite photos, let’s learn about some other composite photos that are definitely not fake.

Look at these websites: they are about how to take composite photos. But they are not about faking pictures, are they?

Why take composite photos? So you can get a large, hi-resolution picture of something. How else can you do that? You could  use a wide angle lens – but there are limits to how large you can make the image, it introduces lots of fisheye distortion if you make the lens too wide, and you lose detail. Or go further away – but that’s not always possible, because of the physical situation, and you still only get a relatively low-resolution image.

As one of these sites puts it

On my iPhone’s photo app, one of the options is to take panorama. I can hold the camera up, press the button and move the camera round in a right-wards arc, keeping it level. The iPhone camera takes a strip of photos and stitches them together automatically.

That’s a composite photo. Is it a fake? (only in the sense that every photo is a ‘fake’ – it’s a two dimensional collection of pixels or dots of coloured dye on paper, not the thing that was photographed).

But I’ve got composite photos of a wetland bird reserve near my home, for instance, and of Cape Cornwall in the south west of England.

Here is that one:

Those places really exist, I was there when I took the photos, and they fairly represent what I saw.  They are composites, but not fakes. I've also enhanced this panaoramea a bit, to make it clearer, more like what I actually saw on that day. Yet the place still exists, and this is a fair record of it.

It’s a hobby for some people to take large composite photos of all kinds of scenes. It’s sometimes called hyperresolution – Google it

Here is an example of software for stitching multiple pictures together:
http://matthewalunbrown.com/autostitch/autostitch.html

So why take composite photos of Earth from space?

It’s exactly the same reason – the Earth is very big, and the satellites are mostly quite close to it. So, instead of taking one very low-res wide angle, they take a lot of small photos and stitch them together. 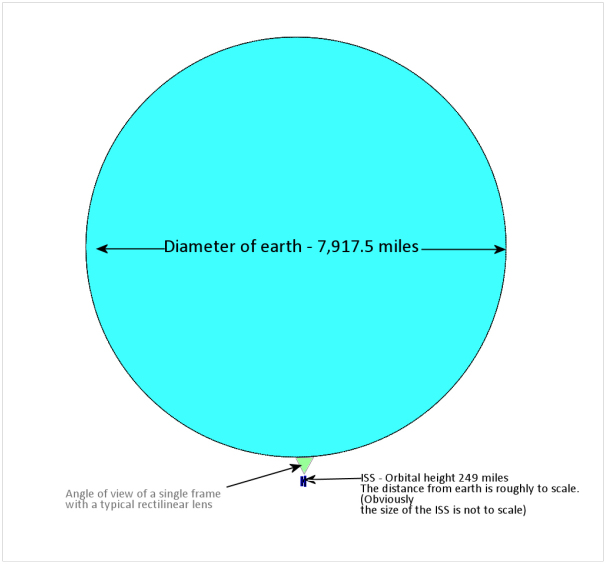 Here is a  a picture I drew showing how close the ISS is to Earth, distances roughly to scale:

Most satellite photos are taken for close-up scientific study of the earth (or reconnaissance), not to give a “long shot” of the whole globe.


But there are plenty of whole disk photos as and I gave links to just a few of them above.

Oh, and if all composite images are fake or cgi, so is every picture you take on your smartphone. Every one of them has been split up and recombined - so are they fake?
See http://electronics.howstuffworks.com/cameras-photography/digital/digital-camera4.htm

Now here are some photographs of the earth that are not composites. 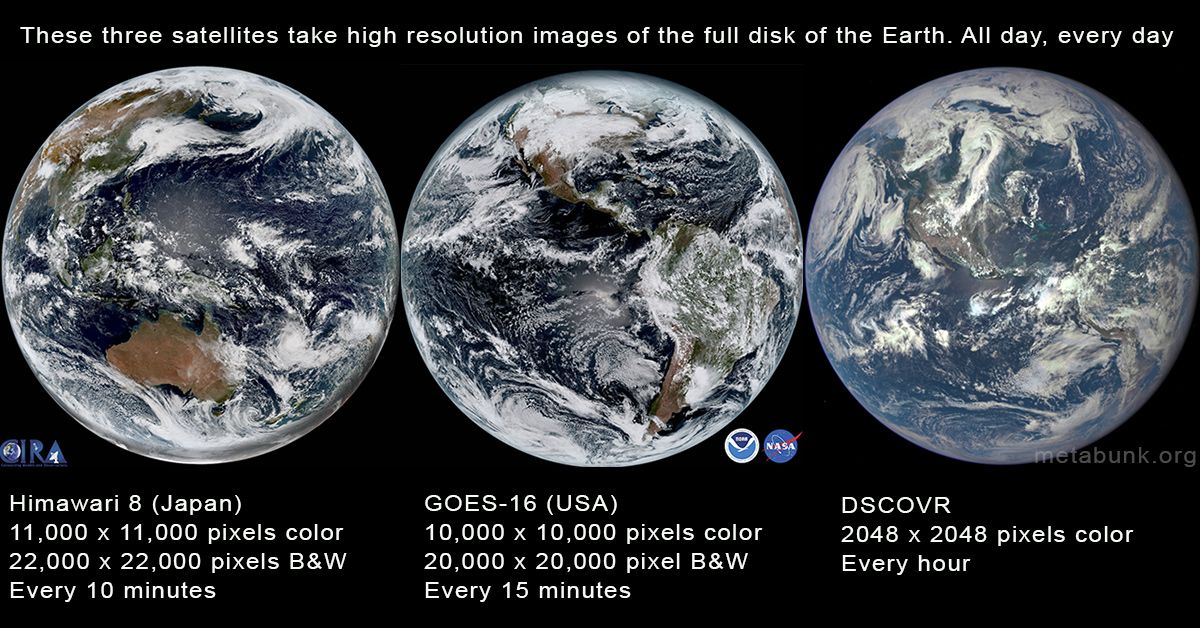 There are several satellites that take photos of the full disk of the earth on a regular basis, but the most impressive are the three above. The first two (Himawari-8 and GOES-16) are geostationary satellites taking photos from 22,236 miles above the Earth's equator. The third, DSCOVR is located in an orbit between the Earth and the Sun, about one million miles away. All three take several photos a day. Himawari-8 is a Japanese weather satellite, and so is in orbit over the Equator with a good view of Japan. It is remarkably high resolution, producing images 11,000 pixels square (121 Megapixels), and in color. It can go up to 22,000 pixels (484 megapixels) in B&W (using just the red wavelength of light)http://www.data.jma.go.jp/mscweb/en/himawari89/space_segment/spsg_ahi.html