93) “The St. George’s Channel between Holyhead and Kingstown Harbor near Dublin is 60 miles across. When half-way across a ferry passenger will notice behind them the light on Holyhead pier as well as in front of them the Poolbeg light in Dublin Bay. The Holyhead Pier light is 44 feet high, while the Poolbeg lighthouse 68 feet, therefore a vessel in the middle of the channel, 30 miles from either side standing on a deck 24 feet above the water, can clearly see both lights. On a ball Earth 25,000 miles in circumference, however, both lights should be hidden well below both horizons by over 300 feet!”

Wrong lighthouses.
What you can see from this position to the east, is not the Holyhead pier light, but the South Stack Lighthouse in Wales, which is closer, much higher (range 44km) and in the same direction when you are in the middle of the channel. Same in the other direction: Baily lighthouse (close to Dublin) will be in the exact opposite direction from Stack lighthouse and also stands much higher (range 48km) than the Kingstown light.  Distance between these two is 90km. So, within a certain range of 2km you don't even need to raise your head above sea-level to be able to see both of them at the same time. Needless to say that on a ship you are always a few meters above sea-level, so you will be able to see both of these lighthouses for quite some time. We didn't even need to factor in refraction for this one. 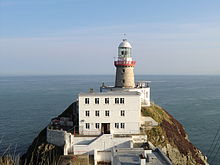 The holyhead breakwater lighthouse has a regular range of 23 km, and a height of 19m.
The other one is similar; 20m high.

Both have extended range because they use a Fresnel Lens, apparently.

The rest of the difference can probably be explained by a mirage.